One person was shot dead on Wednesday, September 22 after armed bandits managed to walk past security guards in the heavily guarded Ol Moran area of ​​the Laikipia Conservancy.

The attack occurred in Wangwaci which is not only inundated with police but also national reservists.

According to George Karuiru, a member of the County Assembly (MCA) for the region, the bandits also took away livestock.

Police were deployed to schools in Laikipia West on Monday, September 13.

The incident comes just days after Rift Valley Police boss George Natembeya declared a return to normal in the region after a successful blitz.

During the attack, the police managed to subdue the bandits as they were outnumbered and overqualified.

Police launched the campaign after the bandits refused to obey orders to evacuate the reserve after wreaking havoc on residents of the area. However, the challenged bandits continued the attacks.

They attacked ranches, stealing cattle from ranchers who are mostly foreigners. Striking over their weight, they even attacked police camps in the reserve, killing some and injuring others.

As a result, the government, through Interior CS Fred Matiang’i, announced a 12-hour curfew in the area.

Shortly after the announcement, the bandits launched another attack, torching a store belonging to one of the schools. A more reinforced police unit has been deployed to deal with the bandits.

Images captured by a drone operated by one of the local media showed the bandits retreating as most of them had lost their lives in combat with the officers.

Tiaty MP William Kamket was arrested by detectives from the Criminal Investigations Directorate (DCI) on September 8 in connection with clashes in Laikipia. He has since been released on bail.

On Monday, September 20, four men armed with AK47 rifles raided the Ewaso police patrol base in broad daylight and seized weapons as part of a well-oiled plan. At the time, only one policeman ran the camp. 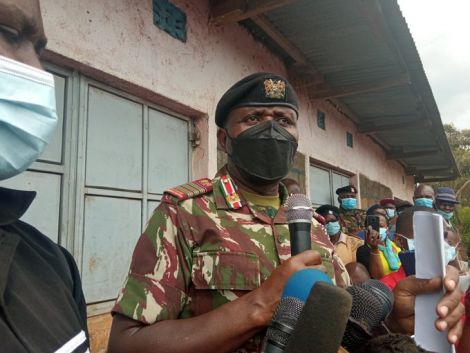 Digital device promises to save millions of ...